Someone mentioned theatre and maybe that's his flaw, like Shatner's. What's overacting for TV would be great acting in theatre they have to reach the far end of the audience , but TV needs something different. Well, just compare A. Robinson to Brooks! Robinson gives us the whole deal: body language, facial expression, subtle line deliveries; He is Garak. Second, the morality and obsessions of Sisko have been questionable from the very beginning. He disliked Picard who was a Borg's victim and held him responsible for his wife's death.

He went after the Maquis not because of Starfleet honor, but for revenge against one man.


He deliberately poisoned a planet's atmosphere for his own personal gain. He bribed and blackmailed many times mostly Quark. He disobeyed orders to go and save one man instead of keeping the station safe. And never once his position as a starfleet officer is threatened, he's even promoted!

And at the end of this episode, he goes punching Garak to ease his own conscience. Conclusion: Quark is more moral by Ferengi standards than Sisko is by human standards. So, I'd have liked to have the writers take a bigger risk and have him do this without Starfleet knowledge and acquiescence. It'd have made sense and I wouldn't have lost my respect for Starfleet. Compared to that Oh, so you were involved in getting 1 Romulan Senator killed. That's IT!? You didn't even kill him! I think people forget that the fact Sisko is agonising over what has happened is the whole point.

A bona fide cynical show would have these events happen as a matter of course. That's my reaction to the concept of Section 31 from the previous episode too. People react like they were the end of Star Trek Bashir and Reed both "join" them in one fashion or another, but not wholeheartedly, usually subversively, with their own agenda at work.

In both cases I think it's clear while DS9 examines dark things, it's final stance is not positive about them.

Also I think it's interesting that someone pointed out a Roddenbery Federation would have lost to the Dominion long ago. That's what I find interesting about the idealism of the Trek universe I think people would say a sufficiently evolved humanity would find a way to make diplomacy work Assuming the Dominion fall into that category as well, what does the Federation do? That's why I think DS9 is a worthy Trek show.

It's easy to be enlightened when you're not being attacked, when you're not being tested. The Federation probably did start to crack along the way, but I think it's worthwhile to show that enlightenment is hard to maintain, but important. On anther note, I do wish some form of Trek was still going, because I think one day the Romulans would have found out what happened in this episode. That would have started a great arc.

The only thing I didn't like was Sisko talking to the camera. This kind of took me out of the episode every time it was done. However, with that said the last scene was still great. Chuck AzEee! Fri, Apr 12, , pm UTC Arguably, Deep Space 9's opus, and while many might see Sisko's anguish on involving The Romulan Empire in the Dominion war as a bit melodramatic, but in truth, what he wound up doing cause a chain of events that would despite the heavy casualty aspect, end a war that would have cost billions and billions and all it took was the murder of one very important Romulan senator.

Garak knew that and acted upon it. To be honest, my biggest problem with Sisko in this episode is that his reactions in different parts of the episode are out of keeping with the scale of his actions. Being accessory to the murder of a Romulan senator and his aides is terrible -- but the loss of life of that action is simply nowhere near the loss of Romulan lives resulting from the forgery of evidence that the Dominion is planning on going after the Romulans.

In the Pale Moonlight - The Guild (Rhode Island) - Untappd

Oh, yes, the Romulans would have been attacked by the Dominion anyway, most people agree, but the Romulans had exactly the same information the Federation had and came to the conclusion that they would be safe, and the Romulans strike me as better judges of what is in their own best interests than Sisko, who doesn't give a damn about Romulans. For what it's worth, I also think that while we can suspect strongly that it's in the Romulans' best interests to enter into the war against the Dominion, I don't think the series provides enough information for us to conclude that with certainty.

This is still a strong episode, but Sisko is too blase about the manufacture of evidence early in the episode for me to be as sympathetic to his guilt later on as I would otherwise be. Here's a story I'd like to see: the Romulans finding out about the deception and assassination of Vreenak. How would they react? Considering that the Romulans were the villains in the last two both poor Trek movies, it might have been interesting if somehow word got out to the Romulans that they were tricked into joining the war effort to save the Federation and this led to an increased desire for retaliation on the Federation for their deception and, I suppose, a much greater hostility to Spock's attempts at reunification.

Garak alludes to this in his final conversation with Sisko: "that's why you came to me, because you knew I could do things you couldn't". I really wish this was mentioned in the review because: It makes the episode that much better and really highlights how important someone like Garak can be which easily turns into a moral argument. It totally seems like Garak intentionally lied to Sisko when he said, "all my contacts were killed"..

But he never completely lied; he never actually said he was going to pursue Sisko's plan and I'm sure he really did have contacts that were killed after he tried to reach them But did he try to reach them after his conversation with Sisko? Or did he spend the time coming up with his own plan? Like, how did Garak know about Vreenak meeting Weyoun? He had to have talked to one of his friends in the Cardassian govt more than once.

But, Garak told Sisko his contacts were killed within 1 day of speaking to him. And, if they were killed, why not tell Sisko immediately? And give an update and say he might have another plan? He basically manipulated Sisko becuz, as Garak said, Sisko went to him to be manipulated. Sisko wanted to believe his plan was realistic, but deep down he knew he needed someone willing to do what Garak was willing to do or at least, that's what Garak said in the final conversation.

It might've been mentioned, but there's actually no scene in which the criminal who makes the forgery dies. It is only stated again that he did die. It makes me wonder if the character was killed in a deleted scene or perhaps was written out of the eventual program. William B: Interesting take on deaths of Romulans. 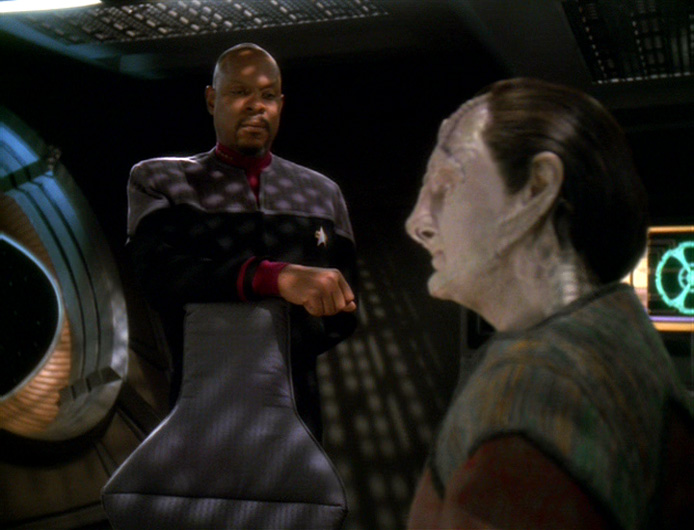 Arachnea: Bingo on Brooks acting. Marco P: I agree about morality. Everybody is immediately bringing Gene's idealism and rules it out.

But here it is basic morality. The message of this episode can be summed up thus: America kills muslims to protect paradise and its freedoms.

This, of course, is a lie. To make the lie sell, you have to invent extreme, ticking clock scenarious, which DS9 then does, to sell you to fascist message. I cannot believe we're even having this discussion. Sisko did not kill anyone, never conceived of killing anyone, never had the desire to kill anyone. Listen very carefully: THAT.